Lindsay Ashton progressed into her role as Account Manager, Defence, at Wincanton this year having spent her previous four years with Wincanton heading up inbound Supply Chain,

Lindsay is an energetic and articulate supply chain leader who enjoys the collaborative and customer focused nature of her role. She joined our Public and Industrial division in 2017 after working 10 years in FMCG where she managed all aspects of end-to-end supply.

Lindsay is working towards becoming a member of the Chartered Institute of Procurement and Supply.

Now General Manager for Screwfix at our 500,000 sq ft distribution centre in Lichfield Nikki Foley has been with Wincanton for eight years in various logistics and operational roles in our Grocery, eFulfilment and General Merchandise.

Nikki has always had a passion for logistics from schooling where she was the only female to study business at GCSE, thinking ‘Why I am the only one?’. This never stopped her from pursing and developing a career in logistics at pace and encouraging more women to join.

Nikki was the recipient of the Rising Star Award at the Logistics UK Awards 2021.

Nikki says: “I am really proud to be one of three Everywoman 2022 winners for Wincanton, alongside all our brilliant finalist. It shows the commitment Wincanton have to diversity and how far the industry has come.”

As Transport Operations Manager at Wincanton, based at Sainsbury’s Northampton distribution centre Varsha Ghetia is jointly responsible for team of team managers, shift managers, over 200 drivers and fleet of some 100 trucks.

Varsha started in the sector as a Transport Clerk and has progressed into various managerial roles through her fearlessness, hard work, sincerity and can-do attitude.

Varsha says: “I feel ever so grateful to all around me. Massive thanks to [Wincanton Health and Safety Manager] Christy Jones for nominating me.  I would like to express my gratitude towards Wincanton, which has facilitated my personal and professional growth. And a huge thanks to my other-half for being my rock and sounding board throughout my journey.”

“After several tough years, it is very special to see our colleagues recognised for their success and celebrate in person at the prestigious Amazon Everywoman in Transport and Logistics Awards.

“Lindsay, Nikki and Varsha are fantastic examples of the vital contribution women make to transport, logistics and supply chain and their progression and accomplishments are an inspiration to all our colleagues across our business.

“Furthermore, I’m delighted that our colleagues were nominated for five awards – this shows that Wincanton is a place where talented people can develop their careers, unlock their potential and delight our customers.”

Also nominated at this prestigious event were:

About the Everywoman Awards

The Everywoman Awards celebrate ‘the women keeping the country moving’ and the vital contribution they make to transport and logistics. The awards showcase progression, accomplishments and increasing avenues of opportunity within a traditionally male-dominated industry.” 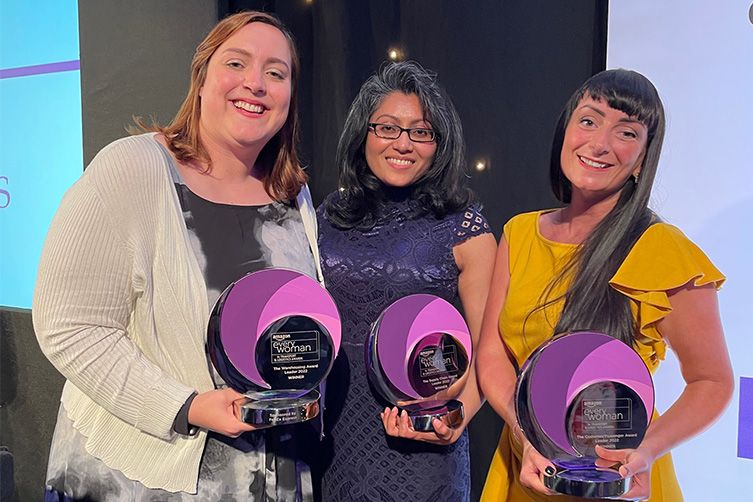